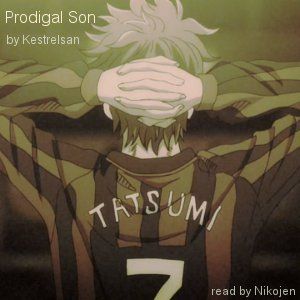 Title: Prodigal Son
Author: kestrelsan
Reader: nikojen (the cover is just me, too)

Author's Summary: They have a lot to work out :).

Quickie Fandom Primer: Many years ago, East Tokyo United was a football (*cough*soccer*cough*) team with a bright future, led by their star player, Tatsumi Takeshi. But Tatsumi unexpectedly abandoned the team, sending it into a downward spiral that it's never really recovered from... and now, Tatsumi is back - this time as the coach. Among the players on the current team is Shigeyuki Murakoshi. Murakoshi was just a rookie when Tatsumi pulled his vanishing act, but he's stuck with the team over the years and become one of its lynchpin players, known by fans as "Mr. ETU". Like the rest of the team, Murakoshi is skeptical at first of Tatsumi's eccentric coaching style, but he decides to trust him, despite ongoing concerns from other veteran players.

Your archive entry is here :)
Flat | Top-Level Comments Only

No cut tags
Top of page